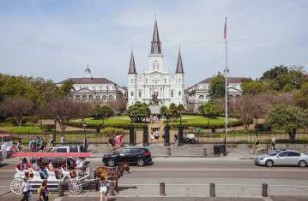 Whether you’re interested in the Battle of New Orleans, the Civil War, World War II or all three, you’ll explore exhibits and hear tales in New Orleans that you will find yourself talking about for years to come.

Come learn about Andrew Jackson and the patriot privateer Jean Lafitte. Hear stories about General Benjamin “Beast” Butler, who led occupied New Orleans during the Civil War. Learn about the role New Orleans played in World War II with the development of the Higgins boat and more.

The oldest neighborhood in New Orleans, the French Quarter is a history buff’s heaven.

Start your day by choosing from one of our endless breakfast options. If you’re looking for a traditional New Orleans style breakfast, enjoy a cup of café au lait and a plate of powder sugar-covered beignets at the famous Café du Monde. Or if you want a more educational option, check out Original Pierre Maspero’s. This is where it’s believed Andrew Jackson met with the Lafitte brothers to plan the defense at the epic Battle of New Orleans.

The first must-see is the Jackson Barracks, built from 1834 to 1835. It was one of the first Confederate posts at the time of secession but was later occupied by Yankee forces. During World War I, the Barracks was a muster station. When the war was over, the property was declared “excess” and was given to the State of Louisiana. Today, Jackson Barracks is the home of the Louisiana National Guard.

Be sure to stop by the French Market, one of the city’s oldest marketplaces found nestled in the French Quarter. Here, you can find our signature snacks such as pralines and snowballs or even find a unique souvenir to take home with you.

Have lunch at Napoleon House to learn about the famous French general, Napoleon Bonaparte, who never made it here. Be sure to order a Pimm’s Cup and a muffuletta, the quintessential New Orleans sandwich. Another option for lunch would be to board the historic Creole Queen Paddlewheeler. Journey through the history of New Orleans as you sail downriver to the Chalmette Battlefield, the legendary site of the Battle of New Orleans during the War of 1812. Here you’ll trace the steps of American and British soldiers before heading back to the Big Easy.

Don’t forget to save some time to explore more of New Orleans with the sites below:

Enjoy dinner in one of the city’s oldest restaurants, Antoine’s, where many presidents and war-time celebrities have been entertained, including Franklin Roosevelt, George Bush, and Bill Clinton, as well as Bob Hope and Bing Crosby. You could also try Arnaud’s Restaurant, which serves a signature French 75 cocktail, in honor of the French 75 mm artillery cannon used in WWI.

The National World War II Museum is a must-see for all patriots. Come discover the courage and sacrifice of the men and women who changed the world. First, relive the last epic battle of the USS Tang at the Final Mission: The USS Tang Submarine Experience. Here, you’ll get a chance to board the most successful submarine in World War II for its fifth and final war patrol.

Your next stop within the museum is The Victory Solomon Theater Pavilion. It is home to the Solomon Victory Theater, featuring the 4D, multi-sensory exclusive cinematic experience Beyond All Boundaries from producer Tom Hanks.

To end your busy day, enjoy dinner and a show on the museum’s campus. Dine at The American Sector Restaurant & Bar, serving a Victory Garden-to-Table menu.

Ready to go? Olivia Celata with New Orleans CVB is waiting for you. Click here to get started